Black Tulip is a daughter of Black Sam Bellamy, the Group 1 winning own-brother to Galileo and half-brother to Sea The Stars. On the dam’s side, she is a half-sister to two smart hurdlers in Meet The Legend and Kayfleur. She has now won three races for us, two over hurdles and recently over fences, so she is a really fun and versatile mare to have on the team! 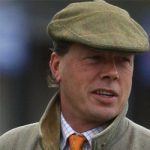 Henry Daly has trained over 600 winners and is based at the stunning Downton Hall Stables in Shropshire since where he took over from Captain Tim Forster. These winners include three at the Cheltenham Festival, two Liverpool Hurdles, a Welsh National and winners of Grade 1 races at Ascot, Cheltenham, Liverpool, Aintree, Wetherby and Kempton.