Of Course You Can (GB)

Of Course You Can (GB)

This filly is by the four-time Ascot Gold Cup winner Yeats, who was Champion National Hunt sire last season with Grand National winner Noble Yeats as his flag bearer, as well as numerous other top class jumpers such as Chantry House and Flooring Porter.

The dam, Free Thinking, won a bumper before gaining all-important black type in a Listed bumper, and she was also a winner over hurdles. Free Thinking is a very well bred mare, being out of the wonderful race-mare Liberthine, who won the Topham Chase over the Grand National fences, before finishing 5th in the big race itself. Of Course You Can was treated patiently last season and will be ready to hit the racecourse this autumn. She is a lovely prospect for the future! 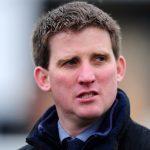 Neil Mulholland took out a training license in 2008 after retiring from his career as a jump jockey, which had been initiated when working for none other than Aiden O’Brien! Neil trained his first Cheltenham winner in 2015 with The Druid’s Nephew, who won the Ultima Handicap Chase. Neil has numerous big handicap wins to his name, and has been crowned Champion Trainer in Jersey Milkwood could be the yard’s next stable star after winning last season’s Scottish Champion Hurdle at Ayr, and backing up this form when finishing runner up in the famous Galway Hurdle.